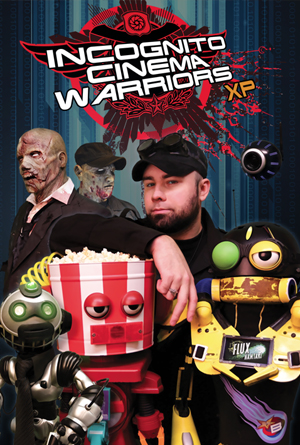 The show riffs bad movies in the comedy format established by Mystery Science Theater 3000 (or "MST3K"), while adding its own original story and characters.

The series follows a soldier and his robot friends who find themselves trapped in an abandoned movie theater during the zompocalypse. Also in residence is the mad inventor (and later a far more villainous special agent) who owns and controls the theater and, in turn, forces them to watch bad movies in exchange for shelter from the swarming zombies outside.

The soldier and his robot friends provide humorous commentary that usually focuses heavily on each film's flaws in a very sarcastic manner. The films are presented with a silhouette superimposed thereon, featuring the trio on the theater's balcony at the bottom of the frame.

Like MST3K before it, the show's plot serves mainly as a pretext for the humorous movie commentary. However, in future installments, the creators have announced they plan to establish more of a story arc for the characters.

In an as-of-yet-unrevealed year of the present or future, the dead begin returning to life in classic horror movie fashion. The United States Military assembles CORPS (Command of Reanimate Processing and Suppression) to combat the droves of cannibalistic undead.

The sarcastic commanding officer of one such squad of zombie-combating commandos, Rick Wolf (played by series creator Rikk Wolf), is deployed to downtown Kansas City, Missouri (where the show is produced in reality). Despite being heavily armed and well-trained, his squad is quickly killed by the zombies. Outnumbered and low on ammo, Rick takes cover in an abandoned movie house, Cine-A-Sorrow Theater (these events are briefly shown in the show's theme song sequence).

Inside, Rick finds two wise-cracking robots by the names of Topsy Bot 5000 and Johnny Cylon. Their creator, Dr. Harrison Blackwood, has seemingly abandoned them and the theater he once owned. The trio quickly finds this not to be the case, however, as a negligent pilot crashes his helicopter very nearly on top of the theater, causing enough damage to allow the zombies to enter. This forces Rick and the robots into Theater 6, which has a series of elaborate mechanical doors that the zombies will be unable to penetrate. Once seated in Theater 6, Dr. Blackwood reveals himself on the movie screen, broadcasting from his sub-basement workshop beneath the building.

In exchange for shelter from the ever-worsening zompocalypse, Dr. Blackwood strikes up a bargain with his old mechanical creations and Rick: if they agree to watch the theater's entire roster of films -- one or more a day, it seems -- he will keep further zombies from invading Cine-A-Sorrow's upper level via security shutters (Rick kills the zombies that have already invaded shortly after this with a chainsaw).

Dr. Blackwood claims he wants Rick to view the films so he might monitor his reactions and admits he lifted the idea from "some low-budget cable show back in 1999," (meaning MST3K) but the motives behind his movie-watching experiments have later been revealed to be a more complex matter with the introduction of The Ludivico Corporation.

Rick agrees, thinking this to be an odd, but acceptable, arrangement, but it instantly becomes a daunting task to view the low quality films. However, Rick and his new robot friends try to make the best of things and rightly trash the retro B-Movies with the only weapon they're left with - sarcasm.

Later in Episode 103, Rick and the robots are also joined by a disembodied zombie head, Professor Zedekiah Logan or "Zed" for short.

Each episode centers on the characters being forced to watch low-grade b-movies (and sometimes short films), with frequent breaks called "movie breaks," "host segments," or "skits." During these segments of the show the characters usually mock the film (but other pop-culture targets are common) with sketch comedy situations.

Rick and the robots have no control over when they are summoned into Theater Six to watch the films, being signaled by an alarm system called Zombie Signal (an homage to MST3K's Movie Sign).

In Episode 104, Dr. Blackwood is assaulted and removed from his seat of power at Cine-A-Sorrow Theater by Special Agent Jonathan Kincaid (played by Gregory Wyatt Tinnen). Kincaid explains that Blackwood has been sent for "re-education" and that his "politics didn't match" with what is acceptable to whom he later refers to as The Ludivico Corporation (a nod to the technique applied to Alex DeLarge in A Clockwork Orange). This implies that Blackwood was working for The Ludivico Corporation from the start and has incurred punishment for offenses like making personal phone calls on company time and possibly stealing office supplies.

As of Episode 104, it is assumed that the premise of the show continues like this with Kincaid as the primary villain instead of Dr. Blackwood for several years.

Rikk Wolf has claimed that he was inspired by director's commentaries in general and the commentary track provided by Michael J. Nelson on the 2004 colorized re-release of "Night of the Living Dead," which lead him to rediscover MST3K (a show he was unable to watch as a teenager because he did not have cable television access). After viewing every episode of the show, he found himself inspired and wanting more, so he assembled aquaintances he found funny from the local Kansas City music scene to independently produce a show in the same vein, but with more of a "heavy metal vibe."

The first episode of ICWXP was produced in 2008 "simply for fun," according to Wolf, as a way to gain experience in film and to pay homage to MST3K. Putting the show on a purchasable DVD was a byproduct of Wolf posting the episode to the ICWXP MySpace page , as numerous e-mails from users wishing to own the episode on disc came in. A demand for more was clearly present, so Wolf continued to work on producing more episodes with the current cast, adding higher production values with each release, as support continued to grow.

Other influences include video games such as Mega Man, Resident Evil, and Dead Rising (all Capcom games). The robots show a heavy influence from Mega Man in their design, CORPS is not entirely unlike the STARS team from Resident Evil, and the situation the protagonists find themselves in is similar to Dead Rising. The characters often reference these influences as well. Wolf (out of character in interviews) has said he loves the notion of zombie growls set against lounge music, which is evident in the show's movie break segments, an idea present in Dead Rising and the Dawn of the Dead films.

As of 2011, only four episodes have been released due to technical challenges, scheduling conflicts and lack of funding. However, the show has garnered a loyal cult-following online and continues to work dilgentely on new episodes.

Incognito Cinema Warriors XP has received almost unanimously positive reviews, gaining heavy praise for its fast-paced and witty writing, especially during movie segments. Many fans have compared it to late-season MST3K in terms of quality and writing.

Michael J. Nelson, host of MST3K from seasons 5-10, has endorsed the show with promotional blurb, "These guys are good. Fast paced, funny riffing throughout. Now fellas, would you please stop making my job look easy?" The blurb is included on the back cover on all ICWXP DVD releases.

The first episode, which series creator Rikk Wolf has stated he's "not a fan of," featured a laugh track, which was ill-received by first-time fans and was quickly dropped by the second episode. Wolf claims the laugh track was solely his idea and was born out of experimentation in ways to differentiate the show from MST3K.

Some have criticized ICWXP for borrowing too heavily from MST3K's premise, branding it a rip-off or plagiarism. This accusation has waned heavily following the resurgence of online MSTing that has occurred following the show's debut, and the fact the show features its own original storyline, characters and distinct stylistic approach. Wolf has stated online with regards to this[1]:

"Yeah, well we wanna be the best damn MST3K rip-off we can be! What I'm saying is people who can't get past the fact we have the same basic format are really missing the point. We never set out to revolutionize the art of movie parody. We just thoroughly enjoy trash-talking bad movies, and this format works great for us and has really stuck. I never thought so many people would follow a project done only to gain some film chops we might've never released. Changing it now would basically be suicide for us. Why do that to appease a few sour grapes?"

Also often criticized is the show's long production gaps between releases. Unfortunately, these delays are the result of situations mostly out of the hands of the creators. On ICWXP's official site, it is stated that "ICWXP is charity work," and goes on to imply the cast and crew can't "quit their day jobs" to concentrate on the show.

However, as of March 2011, there is great evidence to suggest that production on "Season 2" of the show is moving along at a reasonable pace and numerous behind the scenes videos continue to be posted to the ICWXP Facebook, Twitter and Official Site . A behind the scenes series of webisodes launched on March 22nd, 2011 that chronicles the making of Season 2 on Blip.tv .

Retrieved from "https://icwxp.fandom.com/wiki/ICWXP?oldid=4563"
Community content is available under CC-BY-SA unless otherwise noted.